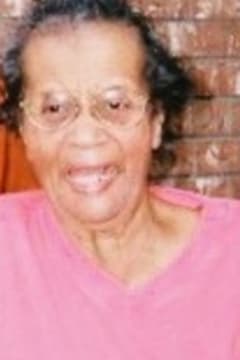 Greather Cabble Brooks was born on September 16th, 1924 in Cheneyville, Louisiana. She was the eighth of eleven children and the first daughter to be born to George and Carrie Crockett Cabble.

Greather attended church with her parents and committed her life to Christ at an early age. She was a lifelong member of Second Union Baptist Church where she served as Church Secretary and President of the Senior Choir. She attended school in Cheneyville until the family relocated to Bunkie, Louisiana, where she completed her high school education at Bunkie Colored High School. Upon receiving her high school education, Greather attended Cosmetology School and became a licensed Beautician. She also worked as a farmer, a housewife, and a domestic servant.

Greather married Henry L. Brooks, Sr. and to this union, three children were born: Audrey Faye, Henrietta and Henry, Jr. They opened their home to her niece, Irma Cabble and nephew, Robert Frazier and raised them as their own.

She was a caring and loving person. She helped to care for other family members in her home as needed. She loved animals as she enjoyed having her cats and dogs around her.